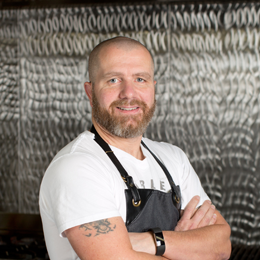 Adi has more than 35 years’ experience in the Food Service Industry. He completed his Chef training in Interlaken, Switzerland, and received his Red Seal accreditation.

After spending some time in the Swiss Army, he returned as an apprentice and completed his Waiter exam in Interlaken, Switzerland.

Adi spent the next year at the prestigious Operakällern in Stockholm, Sweden where he assisted in preparing the Royal Gala dinner for the Nobel Prize, hosted by King Carl XVI Gustaf and Queen Silvia.

In 1991, he immigrated to Vernon, British Columbia, Canada to work at the Swiss Hotel Silver Lode Inn.

His love for travel brought him back to Vernon, BC before moving to Vancouver.

Adi received his Certified Chef de Cuisine (CCC) designation from the Canadian Culinary Institute in 2000. He served several terms on the board of directors for the BC Chefs’ Association as Treasurer and 2nd Vice-President.

After almost 23 years behind the stove, Adi joined Gordon Food Service in BC as District Sales Representative. After 5 years with GFS, he joined Canada Bread/Maple Leaf as Account Manager and Regional Chef where he had the opportunity to develop some creative recipes showcasing the Canada Bread portfolio.

In 2019, Adi joined the Campbell’s team as Account Development Manager & Regional Chef for British Columbia. His many years of kitchen experience combined with his extensive knowledge of the food industry make him an invaluable member of the Campbell Foodservice team in Canada.